The manner in which marijuana charges in Las Vegas and throughout the country are handled has altered considerably over the past few years. Some cities have decriminalized small amounts of marijuana, while others have made it entirely legal. Nevada has authorized the medical use of marijuana for certain patients, among other things.

However, any person accused of possessing, trafficking, selling, or cultivating marijuana in Nevada may be charged with severe criminal penalties regardless of whether or not he has a valid registration certification. Marijuana is still a Schedule I drug under federal law and must be handled carefully. If you’re facing marijuana charges in Las Vegas, Clark County, or Nevada, contact our drug defense attorney at The Spartacus Law Firm for a free consultation.

What Constitutes As Marijuana In Nevada?

The Nevada Uniform Controlled Substances Act defines marijuana in Nevada Revised Statute Section 453.096 as follows: “Marijuana” refers to all parts of any plant of the genus Cannabis, whether growing or not, including the seeds and resin extracted from any part of the plant. It also includes extracts from the plant, such as oil, hashish and kief.

The mature stems of the plant, fiber extracted from the stems, oil or cake manufactured from the seeds of the plant, any other compound, manufacture, salt, derivative, mixture or preparation of mature stems (except resin extracted therefrom), fiber, oil or cake (including sterilized seed which is unable to germinate), and any other component that is found in marijuana but not listed above are included.

Types Of Marijuana Charges In Nevada

Despite the fact that marijuana is still unlawful in Nevada, the state’s legislation sets out numerous penalties for individuals who possess, sell, grow, or traffic it. Depending on certain elements of the crime, the fines involved with these infractions can range from minor to some of the most severe felonies. The following are some of Nevada’s most frequent marijuana offenses:

The cost of possessing marijuana depends on the quantity allegedly possessed. A first offense for marijuana possession of less than one ounce in Nevada is a misdemeanor, with a fine of $600. A second violation is a misdemeanor punishable by up to $1,000 in fines. A third offense is considered a felony and can result in up to one year in jail and $2,000 in fines. If a person is convicted of a fourth offense, he or She could be charged with a Category E felony.

Possession For The Purpose Of Sale

Possession with the intent to sell a Schedule I substance in Nevada might be a Category D felony, depending on the circumstances. This may result in between one and four years in jail and $5,000 in fines for a first offense. A second conviction could result in a sentence of up to five years and up to $10,000 in fines. A third or additional conviction can result in a sentence of three to 15 years imprisonment and fines ranging from $20,000 each.

According to Nevada Revised Statute 453.3393, it is also a crime for anyone to intentionally or knowingly produce, grow, plant, cultivate, harvest, dry, seed or process marijuana. A person may be convicted of a category E felony if the quantity is more than 12 marijuana plants and whether they are mature or immature. This might result in one year to four years imprisonment as well as fines between $1,000 and $5,000. The defendant could be ordered to reimburse all cleanup and disposal associated with the plants.

According to Nevada Revised Statute 453.339, a person who sells, manufacturers, delivers, or brings marijuana into the state is guilty of trafficking if they do so knowingly or intentionally. Being in actual or constructive possession of the substance is included in this definition. If the amount of marijuana you’re trafficking reaches between 100 and 2,000 pounds, it’s a Category C felony that can result in one to five years in prison and fines up to $25,000. A Category B felony could apply if the cannabis weighed between 2,000 and 10,000 pounds.
If someone is accused of trafficking more than 10,000 pounds of marijuana, he or she may be charged with a Category A felony. This is punishable by imprisonment for life with the possibility of parole after five years or a fixed term of 15 years with eligibility for parole after five years have been served, according to the law. Up to $200,000 in fines could also be imposed.

Based on whether the charge is for marijuana possession or sale or cultivation, the State establishes varying standards. The penalties also consider the quantity and whether it is a first time or repeat offense (second conviction, third conviction, or fourth or subsequent conviction). As a result, the state statues simply provide instructions, and each sentence may be different based on the particular facts and circumstances, the defendant’s criminal history, and even which judge is overseeing the judgment. 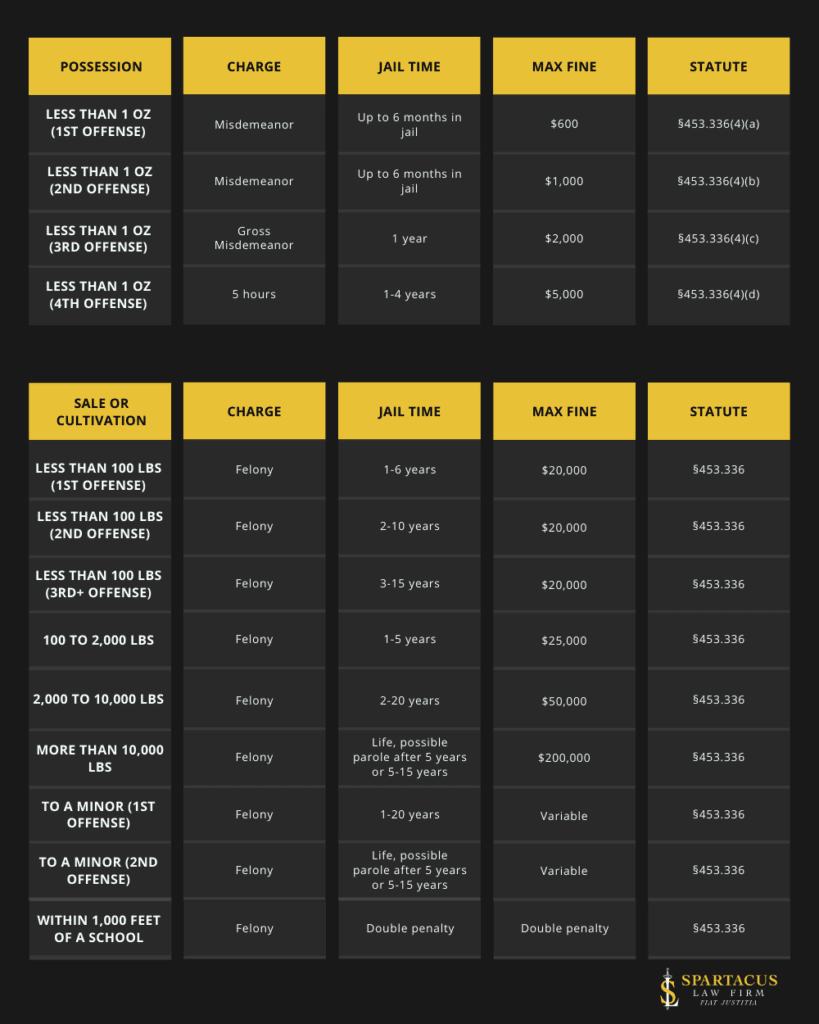 The use of marijuana for medical purposes is now legal in 20 different states, including Nevada. AIDS, cachexia, cancer, glaucoma, post-traumatic stress disorder (PTSD), persistent muscular spasms or seizures, severe nausea or pain, and other illnesses may be addressed by the program. A registry card is only valid for one year and would be renewed unless the holder moves out of state or loses his or her qualifying status. A person who is licensed on a registry card may possess up to two and one-half ounces of usable marijuana in any one 14-day period, as long as he or she does so without exceeding the legal limit. According to Nevada Revised Statute 453A.200, such a person could legally own up to 12 marijuana plants at any time if they were not yet mature.

If a card has been granted, the individual is limited to that amount. According to state law, doing so may result in criminal charges and having a medical marijuana card are not an acceptable defense against such allegations. The holder of the card might choose a designated primary caregiver. A caregiver who is not a qualifying patient would be able to legally assist the cardholder in administering medical marijuana. If the caretaker is sick or lacks transportation, they might be allowed to travel to a dispensary for the cardholder.

Driving Under The Influence Of Marijuana In Nevada

Driving under the influence is a very serious crime in Nevada that may result in DUI charges. The person would have been intoxicated by alcohol, just as if he or she had been charged with this offense. If no aggravating factors are present, a first or second offense might be classified as a misdemeanor. Third-time offenders may be charged with felony penalties.

What If I Have A Nevada Medical Marijuana Card?

Your Las Vegas marijuana possession lawyer will be aware of the recent and changing laws surrounding medical marijuana, which is a developing field of law that an experienced criminal defense attorney will monitor. A medical marijuana card protects you from being arrested if you are caught with small amounts of cannabis or cultivated it yourself.

A marijuana identification card does not guarantee that you are free from prosecution for any drug offense. You can still face charges of selling cannabis, intending to sell it, and driving while under the influence of marijuana. Furthermore, despite the fact that medical patients using marijuana is legal in most states, it is still against federal law (much like alcohol or tobacco), and even for medicinal purposes.

What Is “Marijuana Possession” In Nevada?

Actual, constructive, and joint possession are all defined under Nevada law. These three are explained in more detail below:

The location of the marijuana is critical to Nevada law enforcement in determining whether or not to arrest someone for marijuana possession. If cops discover marijuana on the body, car, home, work desk, or any other place where the suspect has control, they may swiftly reach the conclusion that a person is carrying marijuana.

Can I Smoke Pot In Public?

No, Nevada’s recreational cannabis law now restricts usage to home only. However, in Las Vegas, “lounges” are being licensed where people may smoke a joint openly in public. Currently, state legislation prohibits being drug-impaired while not having a prescription from a medical doctor.

Can I Get Marijuana Possession Charge In Nevada Sealed?

If you’ve been charged with misdemeanor or felony marijuana possession in Nevada, you should contact a skilled Las Vegas marijuana possession attorney as soon as possible. You should not attempt to defend yourself by yourself and hope the prosecutor will be lenient with you. Our experienced drug crime defense lawyer The Spartacus Law Firm will assess the facts of your case. We’ll examine whether the officer who charged you followed correct procedures and then devise the most effective defense strategy possible. Contact our office today for a free consultation and to learn more about how we can help.
Loading...